On October 21st, 2015 the board of the Apache Software Foundation voted to establish Calcite as a top-level Apache project. 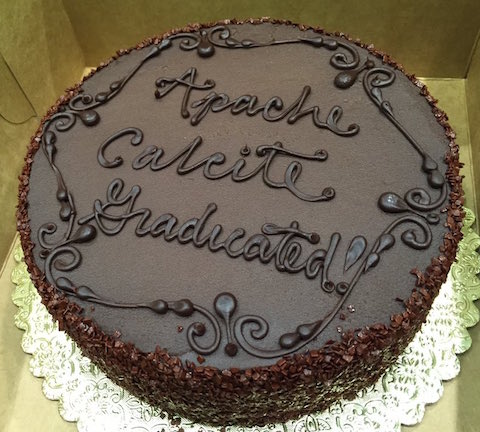 Describing itself as “the foundation for your next high-performance database”, Calcite is a framework for building data management systems. Calcite includes a comprehensive implementation of relational algebra and an extensible cost-based query optimizer. It also includes an optional SQL parser and JDBC driver.

Calcite joined Apache as an incubator project in May, 2014. To graduate from the incubator, projects have to prove that they can create high quality releases, form a diverse community, and operate as a meritocracy.

Calcite’s committers have delivered eight releases during incubation (roughly one every two months) including the milestone 1.0 release in January, 2015.

The project has become a key component in many high-performance databases, including the Apache Drill, Apache Hive, Apache Kylin and Apache Phoenix open source projects, and several commercial products.

The Calcite community met at a hangout on October 27th, 2015, and celebrated with a graduation cake.